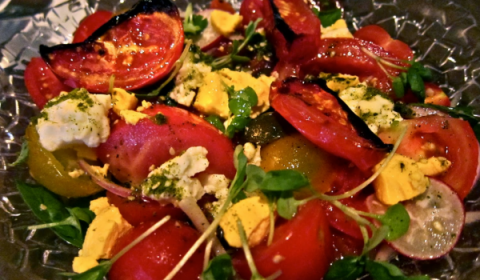 Israel can take pride going into 2016, in the knowledge that four of it’s restaurants have made it onto ‘La Liste’, compiled for the worlds top 1000 acclaimed restaurants.

‘La Liste’ was invented by Antoine Ribaut, a French-American computer systems architect who compiled the data from many food sources and guides from 92 countries, including Michelin and Trip Advisor. With the help and support of France’s Foreign Minister, Laurent Fabius and the French Tourist board, the 1,000 restaurants were agreed and named, including Israel’s very own Herbert Samuel, Mul Yam, Manta Ray, and Helena.

Herbert Samuel of 6 Koifman, Tel Aviv was ranked 643 and with it’s inventive menu of locally sourced ingredients and beautiful location overlooking the Mediterranean sea, is justified on all levels.

Mul Yam, Tel Aviv’s highly acclaimed seafood restaurant was ranked 668, despite it sadly closing it’s doors back in July 2015, due to a devastating fire.

Manta Ray, 703 Yehezkel Kaufman, also in Tel Aviv came highly ranked at 779, due to its stunning location on the beach, as well as it’s famous fish and seafood creative menu.

Further up the coast in the beautiful Medieval town of Caesarea, Helena, ranked 787, sits in the old port and caters for all palates with innovative Israeli Mediterranean cuisine.

All four of these restaurants have been at the centre of Israeli cuisine for some time now, having already been ranked highly with restaurant lovers  and critics in Israel. Now the rest of the world has noticed the talents of the Israeli chefs and recognising them as competition as seen on ‘La Liste’.