Freekeh is the ancient supergrain that is re-emerging onto our plate as the modern staple.

Freekeh, Wild Wheat & Ancient Grains; recipes for healthy eating, the soon to be published cookbook from author Ruth Nieman, links their historical, biblical and cultural past to modern culinary uses, in our quest for healthy living.

Freekeh takes its name from the Arabic verb ‘farik’, meaning to rub, the archaic process of gleaning this ancient, biblical grain, which remains an annual agricultural tradition across the Middle East.

Freekeh is harvested before the wheat is fully matured, and left to dry out in the sun, before the farmers roast the wheatsheaves on open fires of dry thorns in the fields. The blackened husks are then beaten and rubbed to remove the chaff from the fire, leaving seeds of green, with a distinctive smoky aroma. The wheat is coarsely cracked before use.

Freekeh is a nutrient rich, sustainable grain from our historical and biblical roots, which is re-emerging into our diets as a nourishing carbohydrate, connecting our ancient past to the culinary future. 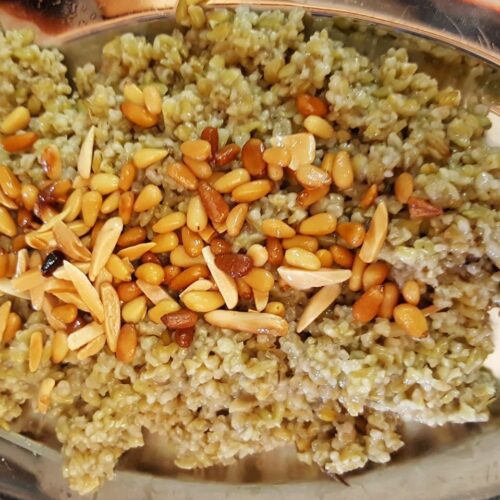 Freekeh is a cereal grain, harvested in the early Spring whilst the wholewheat grains are still soft, green and unripe. The nutritious carbohydrate is traditionally cooked in Arabic kitchens across the Levant, with gentle spicing and a rich chicken stock to make soups, salads and pilafs. This is a authentic recipe making a delicious accompaniment to meat and fish.
Print Recipe Pin Recipe
Prep Time 10 mins
Cook Time 30 mins
Cuisine Middle Eastern
Servings 6

When cooking in the Galilee with local women, I was given the tip of starting each cook by placing cold extra virgin olive oil into the pan together with the onion or other ingredients before turning on the heat, as this seals in extra flavour from the outset as they start cooking together. Baharat is a Middle Eastern spice blend of a number of warming spices including cumin, nutmeg and cloves with a kick of heat from black peppercorns. It pairs beautifully with grains, vegetables and meat and can be found on most supermarket shelves.  Rich, flavoured stocks have traditionally been part of the Middle Eastern cuisine for centuries, usually made from whole chickens, water & aromats. The meat is then shredded and often added to the freekeh or burghul. Good quality stock pots can be substituted instead of homemade stock if you haven’t any on the go or in your freezer. Vegetable stock or boiling water can be used for non-meat eaters.
Keyword Freekeh