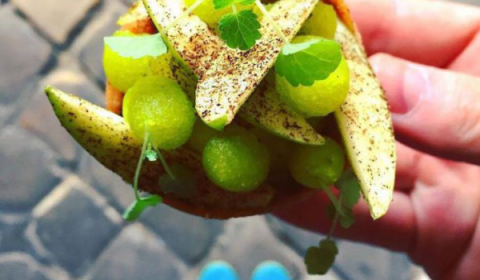 colourful shoes with pastries to match…..

As an innovative graphic designer and chef patissier living in Paris, he combines the two by designing beautiful colourful pastries to go with his stylish shoe collection.

He has created an Instagram feed ‘Desserted in Paris’ which showcases his imagination for beautifully crafted pastries which he cleverly marries to his exquisite taste in footwear.

Already the famous Paris patisserie chain Fauchon, has made it’s mark in Tel Aviv, with the opening of a large shop in Sarona, selling stunning pastries and the magnificent macarons that have taken Israel by storm and yet another major French patisserie Laduree, is set to open it’s doors in Tel Aviv early next year.

Laduree was founded in Paris in 1862 and considered to be the most well known bakery in the world for producing the perfectly round macaron. In 1930 the patisserie realised that by sandwiching the two macarons together with a cream filling was the way forward and today from its main bakery in Switzerland, the innovative flavoured double beauties are distributes all over the world.

The connection between Israel and Parisian patisserie is moving towards an ever closer one and with Tal’s artistic creations becoming a viral sensation, we will be seeing more artistic flair in the form of delicate French pastries to go with the all important Israeli coffee…..